The CEO, Uju Ifejika and other stakeholders in Nigeria's oil and gas sector during a session at the West African International Exhibition and Conference (WAIPEC) organised by the Petroleum Technology Association (PETAN) in Lagos, have stressed the need to balance high crude oil output with commensurate refining capacities, in a bid to reduce import and export charges for petroleum products countrywide. There is a strong believe amongst stakeholders that this will effectively position the country to get more value from crude oil resources.

Other issues discussed by the CEO and other stakeholders, includes the need for the country to

Stakeholders in Nigeria’s oil and gas sector have stressed the need to balance high crude oil output with commensurate refining capacities in order to reduce import and export charges for petroleum products nationwide.

Discussing the future of the sector during a panel session yesterday at the ongoing West African International Exhibition and Conference (WAIPEC) organised by the Petroleum Technology Association (PETAN) in Lagos, the stakeholders believe that this would effectively position the country to get more value from crude oil resources.

They harped on the need for the country to tackle the issue of corruption, poor infrastructure, oil theft and economic instability associated with foreign exchange volatility.

The stakeholders stated: “We need to diversify the West African economic base to be able to handle shocks caused by oil prices. This applies to every country within the sub-region. Oil exports are denominated in U.S. dollar while   some   imports   are   in   Euros.

“Therefore, within   the   West African region, the market fundamentals between the two foreign currencies will be felt either positively or negatively depending on the appreciation or depreciation of both legal tenders relative to each other. In addition, other currencies in Asia such as China, Japan and Korea are not left out and the principle still holds.”

They went on: “In   terms   of economic   and   trade   cooperation   among   ECOWAS countries, the   recently   proposed   Niger -Kaduna   refinery   crude export   pipeline, a   panacea   for   landlocked   West African countries should   be   promoted   as   it   acts   as   an alternative source of crude supply to an existing ready market. Similar infrastructure running from Chad to Cameroun’s Atlantic coast is in operation.”

Baru, who was represented by the NETCO chief, charged indigenous companies to partner and demonstrate greater capacities in order to take up the opportunities reserved for the big foreign players.

He noted that the industry has been fortunate to have sustainable administrations over the years with penchant for establishment of institutions, enactment of laws, identification of key areas capable of stimulating   economic   growth   and   providing   the necessary support to businesses and companies willing to impact positively on the economy.

He lauded the collaboration and timely execution of the Detailed Engineering Design (DED) of the Topside of TUPNI’s Egina FPSO project effected by a consortium   of indigenous engineering   companies   led   by   NETCO.

Baru noted that hitherto, no   engineering   project   of   this magnitude was handled locally, as no single local company had the capacity.

The   NNPC, in   its   wisdom, he stated approved   for   three   indigenous   firms   to collaborate and support the local execution of the project.

This decision, according to him, paid off and had placed on record that over 80 per cent of the associated man hours, which was in excess of one million on a single project, could be effectively executed in one project location in Nigeria. 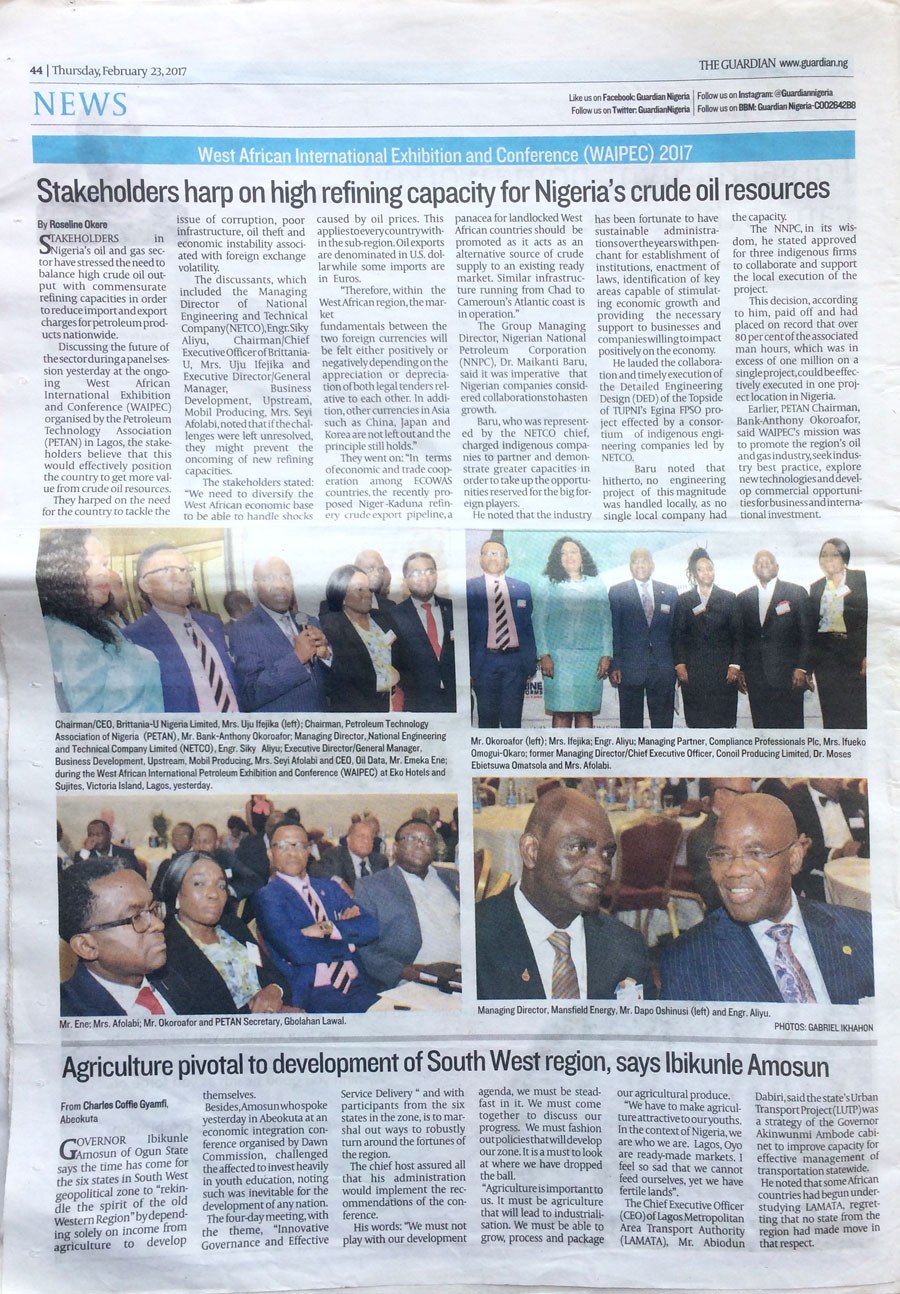